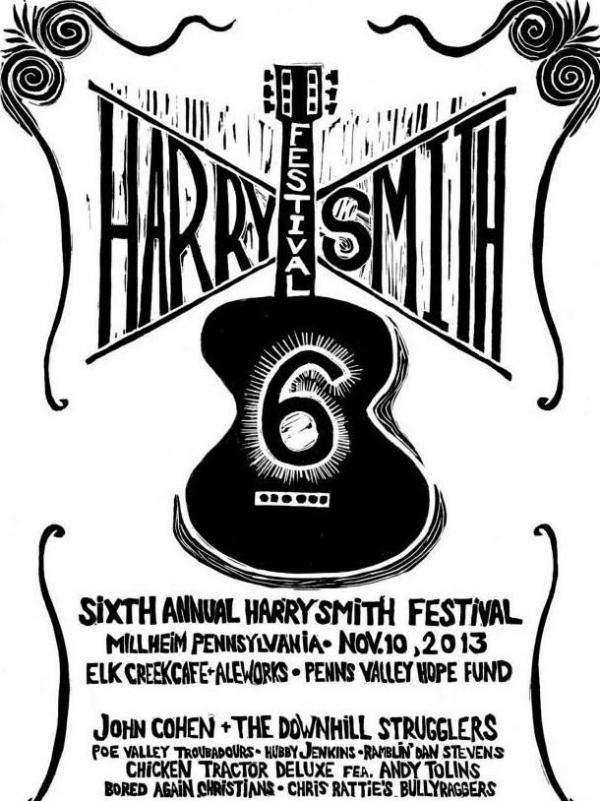 6th Annual Harry Smith Festival in Benefit of the Penns Valley Hope Fund
Sunday, Nov. 10, 2013, Elk Creek Café + Aleworks, 2 PM till All
With Special Saturday Night Performance, Nov. 9, 8 PM, and Short Film Screening/Discussion with John Cohen and the Down Hill Strugglers
advance tickets and further info at:
http://www.elkcreekcafe.net/index.php/20131010727/Events/JOHN-COHEN-and-the.html
ROSTER ANNOUNCEMENT!  This year we are incredibly excited to have confirmed John Cohen and The Down Hill Strugglers joining us as festival headliners.
John Cohen, one of the original New Lost City Ramblers, was a confidante of not only Harry Smith, but also friend and collaborator of multiple artists who were featured on the original Anthology (or who could have been) including Dock Boggs, Maybelle and Sara Carter, Elizabeth Cotton, Roscoe Holcomb, Woody Guthrie, and many others.  Speaking about the New Lost City Ramblers, none other than Bob Dylan wrote, “I listened to The New Lost City Ramblers. All their songs vibrated with some dizzy, portentous truth. I’d stay with The Ramblers for days. At the time, I didn’t know that they were replicating everything they did off old 78 records, but what would it have mattered anyway? It wouldn’t have mattered at all. For me, they had originality in spades, were men of mystery on all counts. I couldn’t listen to them enough.”  For loads of great info on John, see: http://www.johncohenworks.com.
The Downhill Strugglers, based in Brooklyn, are an extraordinarily talented string band who this last year were Independent Music Awards nominees (along with last year’s Harry Smith Fest headliners, The Wiyos).  They’ve toured all over the US and Europe, recorded on Smithsonian Folkways, and are an incredibly dynamic young stringband, steeped in traditional American roots music.
Hubby Jenkins also returns to Millheim.  Hubby was playing with Peter Stampfel’s Ether Frolic Mob when Peter joined us last. And shortly thereafter Hubby was picked up by the Carolina Chocolate Drops (http://www.carolinachocolatedrops.com/ ) and opening for Bob Dylan.  We’re really happy to have him join us again!
Ramblin’ Dan Stevens (http://ramblindan.weebly.com/ ) A great guitar picker, singer and raconteur, of special interest is his unique style of bottleneck slide playing popularized by early Mississippi delta bluesmen including his use of a homemade, three stringed Cigar Box Guitar and one stringed Diddly Bow.  Dan studied with Dave Van Ronk, has toured all over the US and Europe, and puts on a great show.
The Poe Valley Troubadours are local stalwarts on the traditional music scene. Excellent players and excellent guys, they are true local favorites who pack Elk Creek every third Thursday of the month.
Chris Rattie’s Bullyraggers…Chris is a local musician, guitar player and drummer who has played and toured with acts including Marah, and the Rustlanders. Chris grew up in the coal communities of northeastern Pennsylvania, and began playing music with his dad and brother as a local bar band.  For this event, he assembles the Bullyraggers.
The Bored Again Christians hail from the depths of urban Philadelphia, an anticipated, experimental and untested coalescence at this year’s Harry Smith Festival, although with a name that came to us in a dream.
The Chicken Tractor Deluxe ( www.chickentractordeluxe.com ), your host band.  For this show we will be joined by our friend, the great Andy Tolins, award-winning guitarist, songwriter, and singer, and leader of Central PA’s own Triple A Blues Band.
Thank you for supporting independent music, community, and those in need.